Trade War: US Demand for China-based Inspections Drops by -13% as Other Regions Reap Benefits 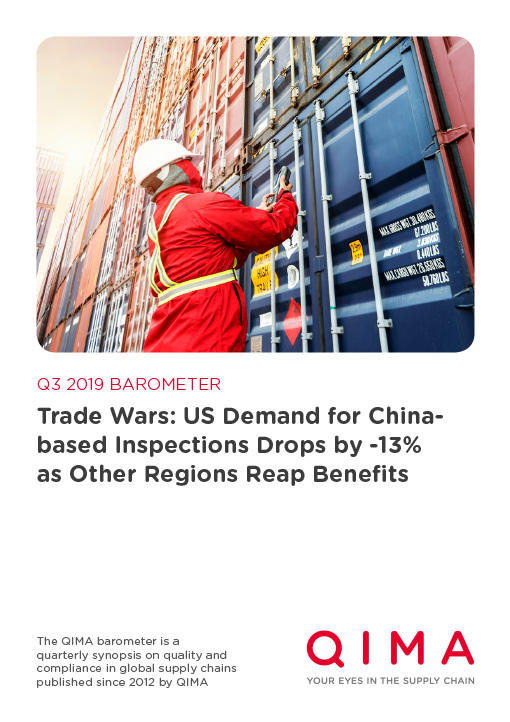 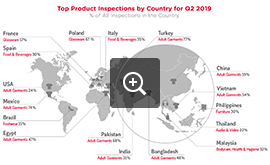 Despite new US-China tariff hikes being on hold, the continuing shifting of US sourcing away from China underscores the lingering uncertainty faced by American businesses. European buyers, while less affected by the trade war, have their own reasons to decrease their reliance on China in favor of cheaper and/or geographically closer destinations. This ongoing diversification creates ample opportunities for new sourcing regions – but with them comes a host of challenges, ranging from product quality to factory safety and ethical risks. This barometer combines data from the ground collected through tens of thousands of inspections and audits with the findings of the June QIMA sourcing survey of 150+ global businesses in all major consumer products sectors.


The US-China trade war continues to serve as a major catalyst for the diversification of sourcing: in the latest QIMA survey, over 3/4 of US respondents reported being affected by the US-China tariffs, citing rising costs as one of the most serious impacts on their business. This is in line with internal QIMA data, which shows that demand for inspections and audits in China from US based companies decreased by 12.7% YoY in H1 2019. In their search for alternatives to China, US businesses are increasingly turning to Southeast Asia, with inspection and audit demand in Vietnam, Indonesia and Cambodia growing +21%, +25%, and +15% YoY in H1 2019, respectively. For US Textile and Apparel manufacturers, South Asia is also a prime destination, with demand for textile inspections and audits in Bangladesh and Sri Lanka doubling in H1 2019 vs. 2018. This year also saw the continuing trend to move production closer to home, resulting in a +47% spike in the volume of inspections and audits ordered by US businesses for factories in Latin and South America.

This drive for diversification is not unique to the US. Our mid-year survey found that the proportion of businesses that have already begun sourcing from new countries this year, or had plans to do so in the near future, was high on both sides of the Atlantic: 80% for US respondents, and 67% for those based in the EU.

Indeed, EU businesses may be less affected by the trade war (only 14% EU respondents indicating they were decreasing their China sourcing due to tariffs), but they are also seeking to optimize their mature supply chains through increased diversification, particularly to South Asia, which saw a +34% YoY increase in inspection and audit demand in H1 2019. Near-shoring is also becoming increasingly important for European companies, with Turkey and Africa recording YoY growth above 40% in inspection and audit demand. In addition, EU Textile and Apparel brands also increased sourcing from Romania and Portugal in 2019.

Interestingly, while China seems to lose ground as the workshop for developed countries, it remains the go-to-manufacturer for emerging regions’ importers: during H1 2019, demand for inspections and audits in China from businesses elsewhere in Asia has grown by +33% YoY; from Eastern Europe and Russia, the growth is +22% and it’s +14% for Middle East importers. Then there are even Western brands that are doubling down on China manufacturing because they have solid strategies for targeting Chinese consumers: such Nike, which recently announced they are choosing to further expand their manufacturing footprint into the market.


A look at QIMA’s factory audit data collected in 2019 so far shows that the global move into new sourcing markets can be fraught with supply chain risks for brands and retailers, as less mature markets are at higher risk of ethical violation. Responses to the QIMA survey suggest that ethical supply chain issues are not at the top of the buyers’ agenda when selecting suppliers in new countries. They really should be: indeed, in Southeast Asia, countries are increasingly struggling to meet ethics and sustainability standards, as seen from the slipping ethical scores in Malaysia, Vietnam and the Philippines (-14.3%, -8.2% and -4.1% respectively, compared to 2018 scores). By comparison, ethical compliance in China continues the slow but steady improvement trend observed over the past year, with particularly notable improvement in the working hours and wages category, which may be a reflection of businesses’ response to the changes in China’s social security regulations that took effect in early 2019.

Meanwhile, South Asian countries, while enjoying increased popularity with US and EU buyers alike, are still plagued by poor factory safety. Specifically, over 80% South Asian factories surveyed by QIMA structural auditors in 2019 were found in need of improvement in the short or medium term (compared to 57% globally), including 6% of facilities presenting immediate risks to worker life and health.


Brands Concerned about Product Quality in New Sourcing Markets: and Rightly So


When asked about their top challenges of working with suppliers in new countries, over 44% respondents in the QIMA survey cited product quality as a high-priority concern. Indeed, data gathered by QIMA inspectors during on-site quality control checks indicates that the ongoing diversification of global sourcing means quality struggles for many consumer goods.

Product quality in South Asia has notably deteriorated since the start of 2019, with inspection failure rates over 33% and 37% in India and Pakistan, respectively. Meanwhile, in Cambodia, over 40% of all goods inspected in Q2 2019 were found outside of acceptable quality limits as local suppliers struggled to keep up with the increased demand without the time or resources necessary to establish proper quality management processes or train new personnel.

Turkey, a more mature market by comparison, handled the increased production pace better: after a brief spike in quality issues around the turn of year, local suppliers succeeded at pushing the inspection failure rate below 25% in Q2 2019. Meanwhile, made-in-China quality showed a 13% YoY improvement in Q2 2019, with 25% of reports outside acceptable quality limits.

These trends clearly show that the current period of global trade uncertainty and shift away from China, while creating opportunities for new sourcing regions, is not the time to let supply chain ethics and quality fall by the wayside. On the contrary, buyers must increase their focus on quality, safety and sustainability when expanding their supply chain into new markets, especially less mature ones. 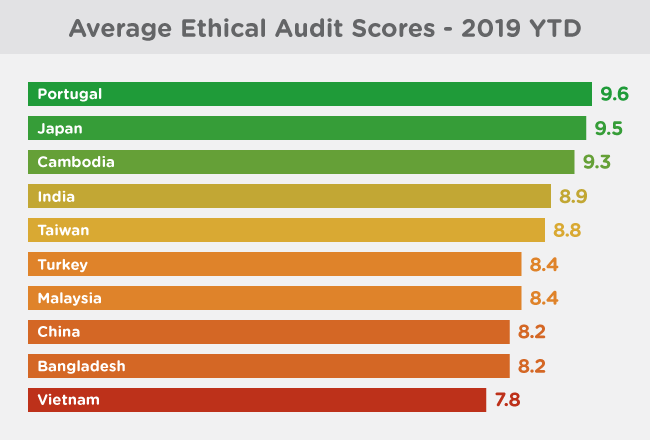